It always amazes me that young people today (those in the developed world, anyway) are growing up surrounded by computers and don’t even realize how recent this is. Yet I can sympathize; I felt the same way about the space program, until I realized that the first unmanned spacecraft had been launched only a few years before I was born, and the first American in space (Alan Shepard, in a sub-orbital test drive) when I was a baby. As youngsters, we tend to assume that whatever existed in our earliest memories has always existed.

I majored in English, but dated a Computer Science major. One evening he knocked on the door of my dorm room and found me banging out a term paper on a manual typewriter. “You’re living in the Dark Ages!” he announced, and a few days later he again turned up at my door, this time with a little card that said I had an account at the computer center. He taught me word processing–very primitive–on a terminal hooked up to a mainframe. But I was probably the first English major to turn in a paper composed on a word processor. Being able to edit without retyping a page or using Wite-Out was huge.

END_OF_DOCUMENT_TOKEN_TO_BE_REPLACED

Spend enough time using computers and you’ll realize a few things. For example, my old laptop had a highly-developed means of sensing when I was almost finished and wanted to shut down; processing slowed to a crawl and the last couple of tasks, which should have taken no more than ten minutes, took 30. Pretty sophisticated for a machine whose processing speed was measured in hours and battery life in minutes. 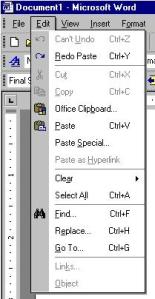 One thing I learned early on is that there is almost always more than one way to do any task in a program. Save a file? You could use File|Save from the Menu Toolbar. Or click the Save icon which, oddly, looks like a floppy disk, even though very few new computers come with floppy disk drives. Or just hit Control-S. I’ve done enough copying, pasting and moving of text within documents that Control-C (or Control-X to cut) Control-V is a single swoop of my fingers across the keyboard–and magically the text is in a new location. Yet I’ve met people who rarely copy and paste who use the Menu Toolbar, a method that seems clunky to me but not to them.