Since the Inauguration there has been protest in the air: in the streets, on social media, on the news. You can hardly avoid it, and for some of us it’s difficult not to feel angry or frustrated.

As a college friend used to say, I’d like to be an optimist but I doubt it would work out.

And then an acquaintance e-mailed me about a genius idea: let’s send Valentine’s Day cards to some of our elected officials, telling them how we feel, but in a positive and friendly way. It wasn’t her idea; she heard about it from someone else. That’s how these things grow.

Thus it happened that on Monday night three of us were sitting around a table, sipping wine and making Valentine’s cards. The clutter of cardboard, markers, stickers, glue and glitter felt like a craft project from my Girl Scout days (except for the wine). I’m no artist, but the idea had me feeling especially creative. I made four postcards, each to a different elected representative, each focused on a specific message. For some it was my opinion on a particular issue where I disagreed with his publicly stated view. For others it was a simple “thank you.” 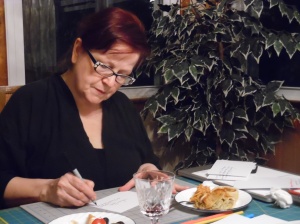 Not surprisingly, one of the issues we addressed is immigration and refugees. And so by the end of the evening we agreed to meet again for another round of postcards. Next time, one of us will bring some snacks from the cuisine of our immigrant ancestors. I’ve offered some Swedish fare, including my grandmother’s pressgurka for the third meeting.

Meantime, I’m checking out some of my digital photographs, looking for images that convey my positive feelings about the American I believe in.

So tell me, Senator: Will you be my Valentine?