I was one of those who delayed joining Twitter because I couldn’t quite figure out what it was about. 140 characters? That’s not enough to say anything, is it? After all, I’d sometimes found the 2,000 character limit of a Blackberry e-mail message restrictive—and I had not embraced IM or text messaging as anything except a quick way to exchange a few words with colleagues when all else failed. (Emphasis on that part about “when all else failed.”) 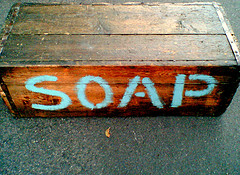 Then I attended a presentation by Bonnie McEwan at the Foundation Center‘s New York library. She talked about various social media platforms, but it was her recommendation about Twitter that made me reconsider it. “It’s important to tweet what you are thinking, not what you are doing.” I mulled it over and a few days later I signed up for a Twitter account. (On the same day I registered this WordPress blog, because I knew there would be times when 140 characters wouldn’t be enough.)

As I began to explore Twitter I saw that it shares an advantage common to simple tools: it’s versatile. Complex tools tend to be specialized—the more features are added, the more the tool influences the user instead of the other way around. Despite the adage that “if the only tool you have is a hammer, every problem looks like a nail,” I’ve used actual hammers to close the lids on paint cans, crack open a coconut, and even knock apart an old bookcase that had once been built using nails and a hammer.

Twitter, in its 140 characters, is simple but infinitely adaptable. Anything you can say, anything you can link to, can become a tweet. So how do people use it? The two best uses are as a town hall or a soap box.

This makes it easy to use Twitter as a broadcast medium. You can use a Twitter account to post your thoughts about any subject, quote from your favorite authors (even yourself), share links… The list is almost endless. And some Twitter accounts do this very well. I follow @BBCWorld to receive updates when the BBC posts new articles or video on their website. I don’t expect them to follow me in return or to engage me in conversation on Twitter any more than I expect a BBC reporter to address me by name on the radio. (That actually happened once—a cautionary tale and an idea for a future blog post—and it freaked me out a bit.) Recently I’ve also been following @AJEnglish, the English feed for Al Jazeera, to get updates about the democracy protests in Egypt.

These Twitter feeds are useful, like having a customized newspaper available whenever I want it; but they’re not very engaging, so I have a Twitter list called News to follow them. A quick scroll through my News list gives me a sense of what’s happening in the world. But if everything on Twitter was like those news broadcasts, it wouldn’t keep me checking my timeline as often as I do.

My real introduction to the power of Twitter came less than 48 hours after signing up. I wanted to follow a conference via live video feed, but when I tried to access the video it balked. I checked the Twitter feed for the conference and learned that others were having problems, too. Fortunately a few people at the conference were live-tweeting the speakers and I spent five hours following along. (It turned out that the conference organizers expected 100-200 viewers but got 1,200.) It was fascinating and I was completely hooked! After watching for a while I felt brave enough to jump in and contribute a few comments, and even discovered someone I know in real life in the conference feed. By the time I left that stream I’d found lots of interesting people to follow, quite a few followers of my own, and learned about Twitter hashtags.

My hashtag epic continued when I discovered a few regularly-scheduled Twitter chats and then the #UsGuys tribe.

These are not soap boxes or broadcasts, although participants often share links to news, blogs or other online articles they think will interest others in the group. No, these are town halls, where people can stand up to say what they’re thinking but also interact with others. We retweet others’ posts with comments, respond, ask questions, offer advice… It’s a community of like-minded people, regardless of geographic location, who share what interests them.

And the Winner Is…

I’m not against a good broadcast Twitter account. Some, especially those who’ve been in the broadcast news business since before Twitter existed, do it exceptionally well—short, punchy and to-the-point. A headline and a link is all it takes. When I want a quick news fix or the latest word on a breaking story, I rely on my News list along with more traditional media. But that list wouldn’t keep me following tweets whenever I’m online; a short visit would satisfy me.

The thing that keeps me checking my Twitter feed and has made me a fan (some might say fanatic) is the ability to interact with others. Whether it’s a one-time #CrisisData conference, a recurring chat like #NPtalk or #TweetDiner, or the 24/7 conversation of #UsGuys, the two-way interactions on Twitter enable me share what I know (sometimes from those broadcasts), see what others are thinking about, and discuss what interests us. It’s the potential for sharing that makes Twitter greater than the sum of its 140 characters.

This post is part of a tribal blog project organized by #UsGuys on the subject “Twitter: Network or Podium?” You can find me on Twitter at @Karen5Lund.

9 thoughts on “Is Twitter a Virtual Soap Box or Town Hall?”